The „We are the World School“ 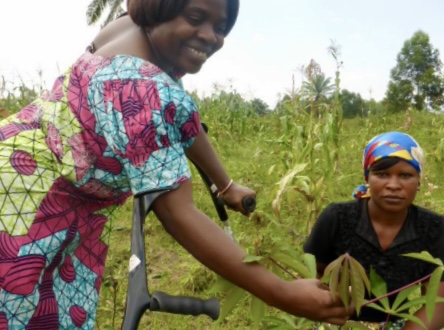 Beni is a city of 355 160 inhabitants located in the northeast of the Democratic Republic of Congo in the province of North Kivu. Die Bewohner von Beni lieben ihre Oase „We are the word school“ 2016 by CAID.

Hortence Kavuo Maliro and Valerie Todenhöfer came to know each other during a collaboration within the framework of the German NGO called “Christoffel Mission for the Blind” (CBM) in the Congo. And they developed an intimate friendship.

Hortence was born in the large Congolese city of Goma, but Beni is her ancestral hometown. Congo is the second largest country in Africa and it is constantly the scene of serious conflicts because of its mineral resources such as gold, cobalt and tin. Hortence works as a customs officer. But in 2014 she founded the barrier-free “We are the World School” with her local organization AISHP, of which she is the director ever since she founded it. (Here is the link to her NGO’s website: https://wearetheworldschool.com/aishp/)

When Valerie met Hortence, who suffered from the Polio-Virus during her childhood, she was shocked to see that Hortence’s prostheses were made of steel and leather, weighing an incredible 15 kg! Valerie invited Hortence to Germany and got her modern and lightweight prostheses. During her stay in Germany Hortence lived at Valerie’s home for three months. One evening Valerie and Hortence talked about life in Beni and the very difficult living conditions there for people with physical disabilities. People with disabilities are discriminated against and often even hidden from the public, because a physical handicap is perceived as a curse in a society where superstition is partly widespread. At that time, Hortence often campaigned on the streets of her hometown Beni in order to raise awareness on this issue among her neighbors and the residents of the city. She also informed the people in Beni about surgical options available for curing physical disabilities.

One day in the evening, Hortence said to Valerie: „My dream would be to build a school in the countryside in Beni that not only gives the poor children the opportunity to go to school but that is also accessible to the handicapped.“ Valerie immediately asked her: “Do you have any ideas what a school like this might look like? Can you come up with a business plan that will enable the school to finance itself? It would also have to be covered by the state’s authorities and recognized as an official school. And maybe you can find out which requirements must be met so that we can get the necessary permits.“

At first Hortence was just speechless – and then she immediately promised Valerie to do her homework. Contracts were developed, a bookkeeping platform was set up and within a very short time a drafted scheme of the school was on the table. The aim was not to construct a temporary building made of wood and corrugated iron like some UN school buildings, but a school that welcomes its pupils for good. A place that is easily accessible to people with disabilities and that can develop into a small oasis and a meeting point for the residents of Beni. A place that offers people a timeout from their everyday lives.

After the opening of the “We are the World School” in the year 2014, the mayor of Beni, Nyonyi Bwanakawa, told Valerie: “One day this young woman (Hortence) comes to me on her crutches and she tells me that she wants to build a school here on this huge site. She tells me that she has the necessary funds from a German foundation called “Stardust” and she asks me whether I would give her the permission to start the construction of the school. At that time I thought she wouldn’t be able to do that in a 100 years. ”

Hortence’s courage and drive made a deep impression on Nyonyi BwanaKawa: “When I lived in Beni, there were no streets, there were two simple supermarkets and nothing more. And now after only a year and a half later, we stand in front of the most beautiful school in the whole of the region. There are now also first-class supermarkets and even cafés in the vicinity. This is just amazing!“

The „We are the World School“ was built on the outskirts of Beni. Most of the students‘ parents are farmers who can no longer tend to their fields because the security situation has worsened due to the frequent and violent attacks by countless so-called rebel groups. The school fee is a mere five USD per semester – a meagre sum which many parents cannot afford to pay. Therefore, the school offers them the option to pay the school fees of the “We are the World School” in kind. Either with chicken, eggs and vegetables – which are sold in the market – or as a harvest helper on the school’s cassava fields (manioc), or as a seamstress for bags, clothing and protective masks, which are sewn in the school; there are many options available to the children’s parents.

Parents can also help out at school if they cannot pay the school fees. For example, they take turns with the other employees of the school and go to the nearby river to carry water to the school in large canisters, a strenuous and laborious task. A monthly duty roster is maintained for this purpose. In the absence of running water in the school and the rainwater being insufficient, the school’s drinking water supply is ensured in this manner. Hortence and we at the foundation are currently trying to connect the school to a well with a new water-pipe supplying potable water to the school. However, the costs for a new water supply line are very high and Hortence and we are currently still counting on the promise offered by a potential supporter of our school. The children’s parents would help in the construction work and in return would not have to pay the school fees. Hortence propagates her conviction in her community that it is important that parents of children with disabilities do not have an excuse for not sending their children to school. This close involvement of the families in the school project created not only a center of education but a dynamic and peaceful oasis for everyone.

“The best thing about this school is the total commitment of the local people to the school,” says Valerie Todenhöfer. „The people in Beni take care of everything: They cut the hedges, clean the gutter, and have planted 900 cypress trees and 400 “calpitius” and fruit trees on and around the school ground so far.“

Professional gardeners teach the students and work with them to plant even more trees so that in the near future they will have a wonderful source of shade during their breaks from class. The residents of Beni love their oasis, their “We are the World School”.

A few days ago I asked Hortence if it would be possible for her to do a short interview with a resident of Beni. Just four days later, Hortence called me and sent me the interview I had asked for. The interviewee Ms. Masika Kamaha is the mother of the student Rebecca Kavira Mulyata, a 6 years old student of our school, and she tells us what moves her to engage with the school. I have attached this exclusive interview below.

The “Stiftung Sternenstaub/Stardust Foundation” is committed to introduce the public to amazing people like Mme Hortence Kavuo Maliro who hails from a small, almost unknown town called Beni in the D.R. of Congo, and who changes people’s lives for good.

Valerie Todenhöfer, M. Belal El-Mogaddedi, Susi Biglmaier and I, as well as the supporters of the “We are the World School”, who call themselves “Friends for Friends”, namely Lilli Löwe, Julia Balzer and Nina Priester, we would like to express with this brief account our appreciation and our high regard to Hortence for the wonderful work she is undertaking in a corner of her country, the D.R. of Congo, whose people deserve so much better.

EXCLUSIVE INTERVIEW WITH MRS MASIKA KAMAHA, THE MOTHER OF KAVIRA MULYATA REBECCA A STUDENT IN THE 1rst YEAR AT THE WE ARE THE WORLD SCHOOL (WATWS).

This interview is done by the WATWS with Mrs. MASIKA KAMAHA the mother of the student Rebecca in order to know about the story of the student KAVIRA MULYATA Rebecca, a 6-year-old girl, studying in the 1st form at We Are The World School.

Rebecca is coming from a very poor family of Beni. She is really suffering from the throes of war since she was born. Rebecca’s family is a war-displaced family; each rebellion pushed them to move from place to place as refugees. They live in misery, they use to leave every things their fields, their home…, and take refuge elsewhere. Rebecca arrived in Beni escaping to the ADF rebels fighting, a rebellion that has been terrorized people since 2013.

Rebecca is the 3rd of a family of 5 children. She was the beloved of her father; but unfortunately she lost suddenly her father few weeks ago and became an orphan. Mr. Bernard, Rebecca´s father died on December 21, 2020 in his vegetable garden a small plot of land that he cultivated surrounding Kasanga´s River. We have to notice that Masika Kamaha(MK)  Rebecca’s mother is not psychologically stable. In one hand the repetitive fighting rebellions has affected her so much and another hand, the suddenly death of his husband has further complicated herself. 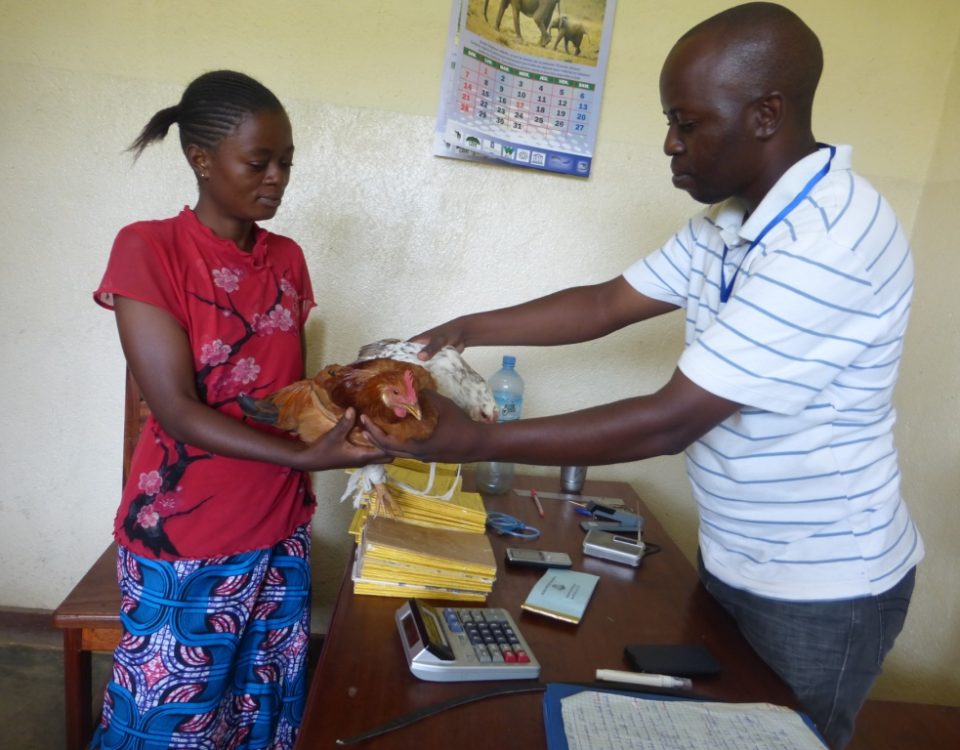 Die Oase „We are the world school“ im Kongo 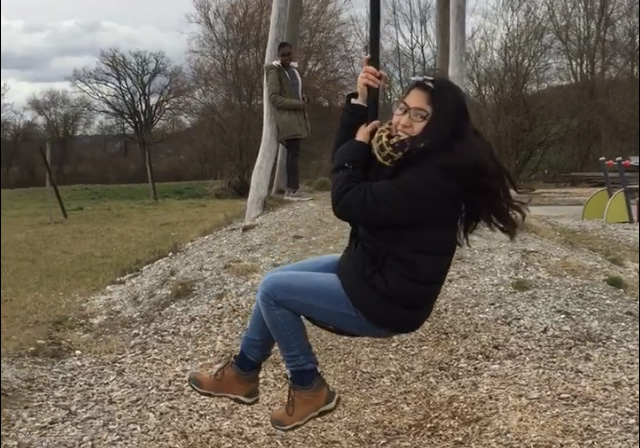